The First Month of a Puppy’s Life

Home » Dogs » Puppies » The First Month of a Puppy’s Life 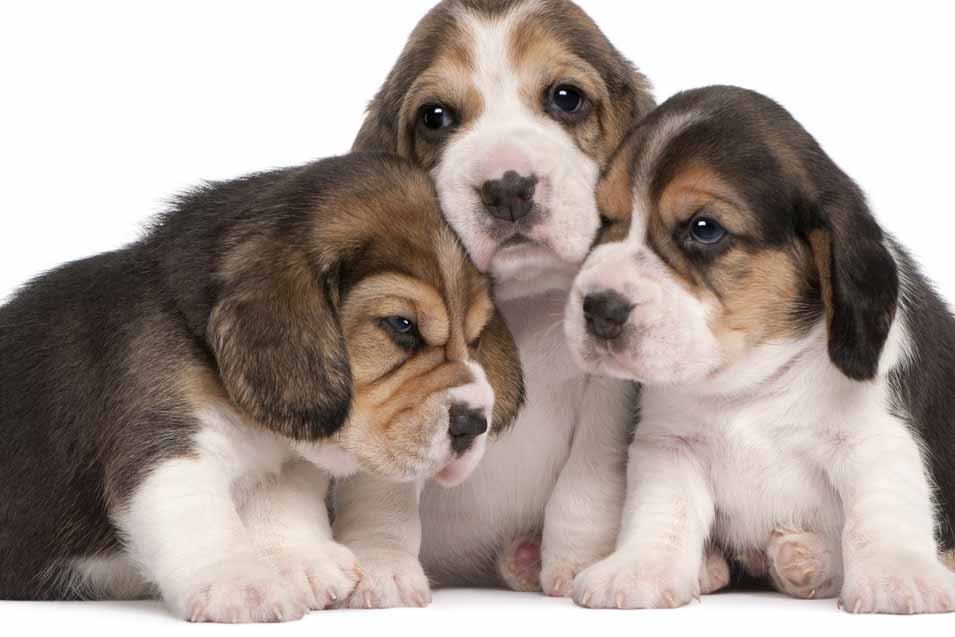 The first month of a puppy’s life is always an exciting time. There are so many “firsts” to experience, and it seems like every day brings something new. Though many people are aware of what happens from the time a puppy lands in his new home at 8 weeks of age, few understand the critical experiences a puppy undergoes in the weeks and months leading up to his placement with his brand new family. These day to day occurrences help to shape who the puppy will become in his adult life and are very important to proper mental and physical development.

The first week of a puppy’s life starts rather dramatically with his expulsion from his comfortable position in his mother’s womb to his appearance in the real world. As difficult as it is for us to believe, a puppy is born without any senses fully functioning. His eyes and ears are still tightly sealed shut, meaning he cannot see or hear. He is also unable to stand upright, crawl, or walk. However, during the first week of life, a puppy’s needs are very few.

Among the most significant needs a puppy has during the first week of life are the following:

Maternal antibodies from colostrum
During the first 24 hours of a puppy’s life, the most critical thing a puppy needs is immunity against diseases. Since puppies’ immune systems do not fully develop until later in life and they are too young to be able to properly withstand vaccination until age 7-8 weeks, puppies must receive immunity from the antibodies possessed by their mothers. During the first 24 hours of life, a mother releases a creamy-like substance known as colostrum. Colostrum provides vital nutrients to help a puppy grow, but more importantly, it also contains maternal antibodies from the vaccinations received by the mother up to the point of birth. It is these maternal antibodies that provide the only protection puppies will have against disease until they are old enough to receive their first vaccination. For this reason, it is absolutely critical that puppies begin to nurse as soon as they are born. Without having received colostrum, the puppies will lack the immunity they need to remain protected and can become ill and even die if exposed to bacteria or disease. The mother dog only produces colostrum for the first 24 hours.

Food
As with any living being, food is critical to brain and body development and overall growth. With baby puppies, gaining weight is of paramount importance. Failure to gain weight at a typical rate of a 10 percent daily increase for the first few weeks of life can be indicative of a problem.

During the first month of life, puppies receive all of their primary nutrition from their mother’s milk. Baby puppies don’t have the teeth necessary to chew food and as a result can only survive on very warm, enriched liquids. If a mother dog develops mastitis or is unable to nurse, puppies can be fed a milk substitute designed to replicate the milk their mothers would produce for them. However, this is not ideal and should be a last resort option. At 1 week of age, puppies will nurse a minimum of every 2 hours, and their mother should be kept with them at all times.

Sleep
Sleep is another important factor in a puppy’s life. To develop and grow, a puppy needs sufficient rest. In the initial weeks of life, puppies do very little other than sleep and eat. Their primary role during this time is simply to continue to stay on target with the projected growth and development rates appropriate to their breed.

Warmth
Baby puppies are very sensitive to cold. At this age, they are unable to regulate their body temperatures on their own, and thus, must be kept very warm as even the slightest chill can cause a puppy to succumb to death. Puppies who end up separated from their littermates in a whelping box can find it very difficult to find their way back to a source of heat and can get chilled and die. With very few senses and no ability to be mobile, puppies must rely on their ability to detect a heat source and their skill at pulling their bodies toward it. It is for this reason that a small whelping box is far preferable to a roomier one.

Breeders use a number of means to ensure their whelping room is warm enough for their puppies. Some will make use of infrared bulbs installed above their whelping boxes as a heat source. Others prefer to use a heating pad or water bottle while others favor the traditional sweat lodge approach. Each method is equally effective and comes down to a matter of breeder preference.

During the first week of life, it is important for breeders to handle puppies as often as the mother dog will allow to get them used to being touched. In addition to this, Day 3 is the correct day to being Early Neurological Stimulation protocols which place slight stresses upon a puppy to help develop his neurological system, response to stress, and heart and cognitive function.

Also notable is that during the first few weeks of life, a puppy cannot urinate or defecate on his own. To ensure proper elimination takes place, the mother dog will “stimulate” the puppy to pee and/or poop by licking the anus region. Since ancient survival instincts are still alive and well in our modern dogs, she will also clean up any trace of their bowel movements to ensure a predator could not detect the presence of her young.

The second week is much like the first. During this stage, puppies are still spending the majority of their time growing, eating, and sleeping. Their mother continues to stimulate them to urinate and defecate, and they are still largely immobile. However, one key development takes place as early as 10-12 days. The puppies’ eyes begin to open. Even though the puppies will soon open their eyes, their vision is still very cloudy, meaning they see things very indistinctly, and their eyes are very sensitive to bright lights.

It is during the second week that puppies typically begin their first round of de-wormer to ensure that they are free from harmful parasites. This is just an initial de-worming which will be repeated on a schedule over the next 8 weeks.

Sometime during the third week, the puppies’ hearing will develop. This is typically evidenced by a puppy showing signs of having been startled by a noise. Once it is evident a puppy can hear things, the breeder then begins to introduce normal household sounds to help the puppy become accustomed to them. It is during this time that breeders should vacuum near the whelping pen and even turn on a blow dryer, slam doors, and drop books. Any sound which might be experienced in the normal run of a day in any household should be played for the puppy to hear and become desensitized to. Many breeders also make use of CDs with sounds on them to help puppies experience different types of noises not commonly found in a home but found in the world such as thunderstorms, fireworks, and even doggy day care. This is an invaluable tool to help puppies learn to be resilient to new experiences and able to bounce back from a fright.

It is also during the third week that the breeder can begin to introduce liquids to their puppies. Many breeders like to supplement the mother’s milk with some warmed goat’s milk. This helps the dam to slow down on her milk production as she enters the weaning phase. It also helps the puppies to transition toward eating solid food.

But the most important development which takes place during this time period is the puppies beginning to explore their world with their mouths and by attempts to get up on their feet and walk. They fall more than they stand, something that is endearing to every breeder’s heart as it is adorable to watch. When puppies begin to explore their world with their senses, it then becomes time to start to introduce one new thing to them every day. This appeals to their natural sense of curiosity but also helps them to learn to seek out new experiences rather than avoid them. It assists with building confident puppies.

By the fourth week of life, the puppies are now able to walk. Their coordination can still be an issue, but they are moving along much more easily now and are ready to begin to explore new areas of the house.

At 4 weeks of age, puppies now show an interest in toys. To help provide proper mental and physical stimulation, puppies should have access to a number of different toys in a variety of textures, colors, shapes, and sizes. At this age, the puppies’ brains are like sponges. They possess little fear and are able to make great gains from every positive experience. However, negative experiences can also leave a lasting impression. For this reason, puppies must always be set up to succeed, and any situation where failure is possible must be avoided.

During this time, the mother begins to wean her puppies. Their teeth have begun to develop, and not knowing their own strength, they will often accidentally bite down on a teat, causing the mother dog pain. To assist with the transition, a breeder should soak puppy food in hot water until it can be ground to a mush then enriched with warmed goat’s milk. This is the first step in transitioning to solid food. By this time, puppies should be urinating and defecating on their own, and the mother dog has most likely abandoned her cleanup duties, leaving that to the breeder. This makes an ideal time for a breeder to introduce a litter box into the puppy pen. Puppies instinctively know that they must keep all bowel movements and urine away from their sleeping and play areas and thus are naturally drawn to eliminate in a litter box. Puppy pee pads can also be used to achieve the same purpose. This is the critical first step towards housebreaking.

The mother dog will also begin to teach her puppies proper behavior. She will often deliberately roughhouse with them to provide the opportunity to teach them proper bite inhibition, a skill which enables them to live successfully with people and other dogs. This is but one important reason why a mother dog should never be separated from her puppies prior to 8 weeks. There are many important lessons a mother teaches her puppies which cannot be replicated via any other means. These skills shape a puppy’s ability to interact properly with his world and must not be missed.

At 4 weeks of age, another round of de-wormer should be administered to the puppies and their mother.

Yes, a puppy is a busy fellow in the first month of life! 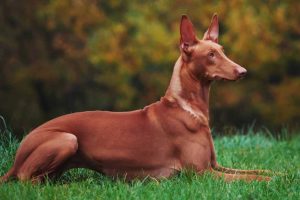 The Best Yard Leashes and or Stakes for Dogs 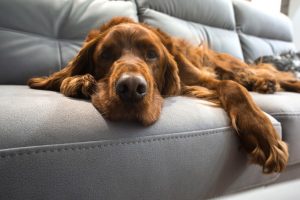 How to Remove Pet Odors From The Home 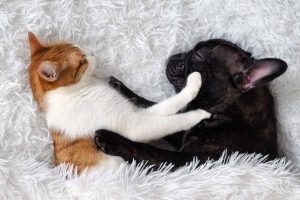 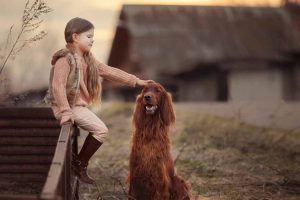 PrevPreviousThe Birth of Puppies – The First Week
NextShould I Get a Dog or a Home Alarm?Next
Menu
The Pet Friendly House