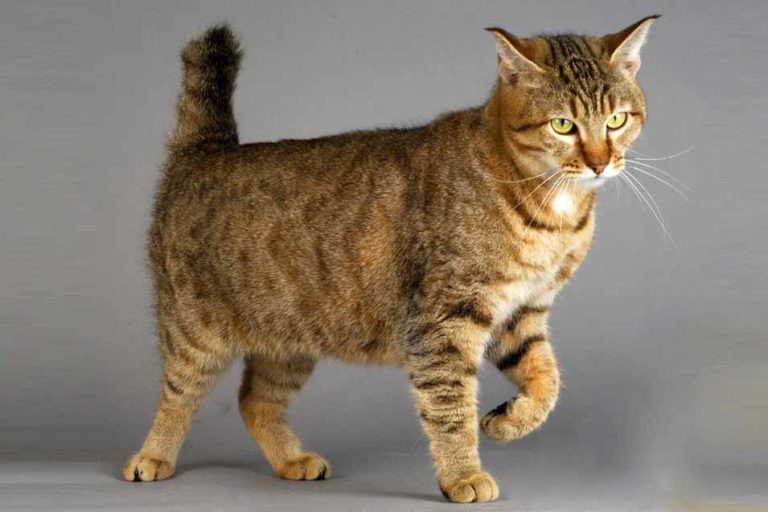 Have you ever seen a Pixie-Bob cat? This is an unusual, wild-looking breed of medium-sized to large-sized cat with a bobbed tail. A Pixie-Bob cat can have short or long hair, and is unique because they usually display polydactylism (having more toes than other cats). Here, we will discuss interesting facts and trivia about the fascinating breed known as Pixie-Bob cats.

The Pixie-Bob cat looks, at first glance, like a small, wild bobcat, albeit usually with a snub tail. Like most cats, the Pixie-Bob cat should be kept indoors at all times, to protect him from the elements, other animals, and vehicles. The average lifespan of a Pixie-Bob is the same as other breeds, approximately 13 years.

Body
Considered a medium- to large-size cat at adulthood, the full-grown Pixie-Bob cat usually weighs between 8 and 17 lbs. They don’t reach full maturity until they are four years old.

Head
A Pixie-Bob’s head is pear shaped. The facial hair on the Pixie-Bob makes him appear to have muttonchop sideburns. Pixie-Bobs have black lips.

Ears
Pixie-Bobs have black tips on their ears.

Eyes
The eyes of a Pixie-Bob are triangular in shape. They are usually born with blue eyes that will change to gold or green when the cat is a few months old. Pixie-Bobs will have dark mascara-like markings from the outer corner of their eye, running through the cheek.

Legs/Paws
The bottom of a Pixie-Bob’s paws are black, with black fur. As mentioned above, they are often polydactyl, with six to seven toes on each foot.

Tail
Most Pixie-Bob cats have bobbed tails or no tail, but some do have tails that can measure two to four inches long.

Generally, the Pixie-Bob is a brown spotted tabby with a spotted belly. They may have a mackerel tabby or striped coat pattern. Stripes may be accented by rosettes, which gives the Pixie-Bob an authentic bobcat look. Colors are usually brown, tawny, light gray or reddish-brown. One interesting fact – the pattern on a Pixie-Bob goes through to its skin! If a Pixie-Bob is shaved (for surgery or something), the skin underneath will often be black.

The Pixie-Bob cat is very loving and affectionate, thoroughly enjoying spending time with his human family. They are considered by many to have a “dog-like” personality. Some Pixie-Bobs can even be taught to walk on a leash like a dog! The Pixie-Bob has a calm and laid-back manner, even though they can be quite talkative, chattering all day. They are great for families with children and with other cats and cat-friendly dogs. Pixie-Bobs are also very intelligent kitties.

Pixie-Bobs are generally healthy cats. They are prone to the most common health problem in all cats: obesity. Keep your Pixie-Bob at a healthy weight by making sure they get enough exercise – because they enjoy playing fetch like a dog, this shouldn’t be a problem! They can eat dry food, wet food, or a combination of both.

When buying a purebred Pixie-Bob kitten, make sure to purchase from a breeder who raises litters in the home. Meet at least one of the kitten’s parents to ensure that the kitten will have a good temperament. Don’t buy any cat from a breeder who “guarantees” the cat free from health problems – no breeder can, or should, guarantee that. The best place to find a reputable breeder is The International Cat Association or the Fanciers Breeder Referral List. A purebred Pixie-Bob cat averages from $600 to $1500.

Or, you could choose to adopt a Pixie-Bob from a rescue or a shelter and give a cat who is truly in need a home. Some pedigreed cats do end up at rescues or shelters. Check out the Pixie-Bob Rescue, Retired List on the Fanciers Breeder Referral List and Petfinder to find Pixie-Bobs who are in need of a good home.