Can Dogs Have Nutmeg 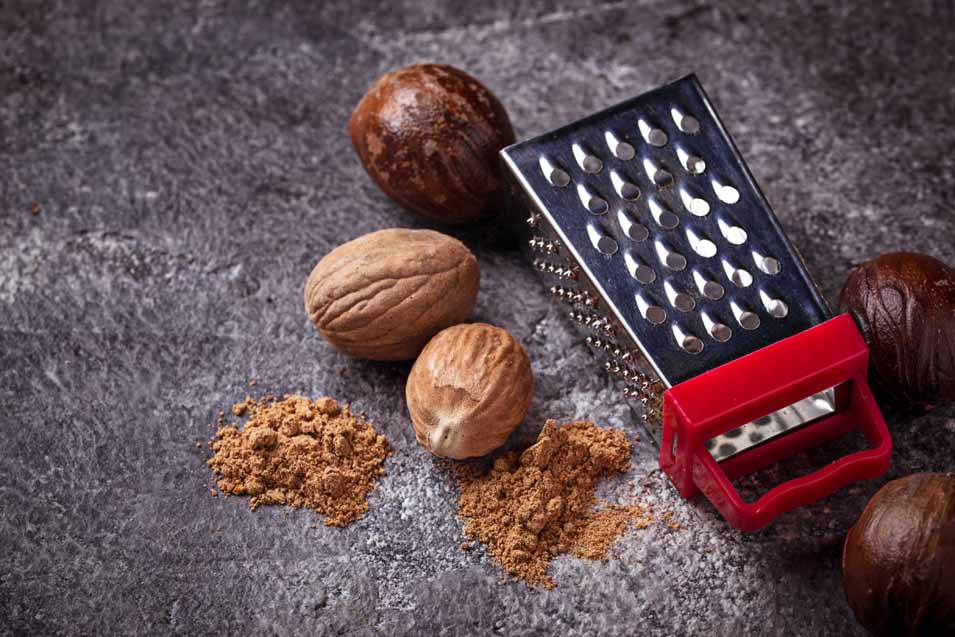 Nutmeg is a quintessential autumn spice. If you love pumpkin spice or seasonal fall baked goods and beverages, chances are that nutmeg is part of your diet. Nutmeg is perfectly safe for humans in small quantities though it can be dangerous in larger amounts. As for dogs, if you’re wondering if they can have nutmeg, the answer is a definite no. Learn more about dogs and nutmeg below.

Even a spice such as nutmeg has nutritional benefits. One teaspoon of nutmeg contains 12 calories, one gram of fat, one gram of carbohydrates, and one gram of sugar. It contains no protein and no fiber.

Nutmeg does provide some vitamins and minerals. It contains vitamin A, vitamin C, and vitamin E. It also contains manganese, magnesium, copper,  phosphorus, zinc, and iron.

Health-wise, nutmeg is a source of antioxidants which may protect against aging and diseases such as cancer, heart disease, and liver disease.

Nutmeg oil is used in some dental products. Nutmeg has antibacterial properties which are effective against oral pathogens that cause dental disease and bad breath.

In folk medicine nutmeg has been associated with improved vigor. One study found that nutmeg appeared to act as an antidepressant for male rats.

A small amount of nutmeg has also been shown to aid sleep, both in duration and in quality. More studies are needed in this area.

On the down side, while nutmeg is safe for humans in small amounts, as little as two teaspoons can cause some signs of toxicity. Symptoms can worsen if larger amounts are taken. Serious complications can result and in some cases death can occur. In large amounts nutmeg can induce hallucinations in humans or it can be fatal.

Nutmeg poisoning usually occurs in people who try to use the spice as a recreational hallucinogen; or in young children who accidentally eat nutmeg.

The toxic substance in nutmeg is myristicin. Myristicin acts as a neurotoxin. In high doses it can cause disorientation, hallucination, increased heart rate and blood pressure, dry mouth, abdominal pain, seizures, and death. Dogs are even more sensitive to the myristicin in nutmeg than humans are.

Nutmeg also contains a substance called elemicin which contributes to the hallucinogenic effects.

The takeaway about nutmeg use is that it’s safe to add a dash to your coffee or use a little when you make eggnog. It’s a normal ingredient in pumpkin pie and other baked goods. However, nutmeg is definitely a spice that should be used in very small amounts.

Should You Give Your Dog Nutmeg?

Nutmeg is a definite no for dogs for the same reasons that large amounts can be toxic for humans. The myristicin in nutmeg can result in disorientation, hallucinations, elevated heart rate and blood pressure, dry mouth, abdominal pain, seizures, and even death for your dog.

There can be some leeway, depending on the size of your dog. A small dog can be more likely to feel the effects of eating a dose of nutmeg than a large dog, for example. Or, a dog that is immuno-compromised, perhaps with cancer, could be more apt to succumb to the effects. But all dogs can be effected by the myristicin in nutmeg.

If your Great Dane takes one bite of pumpkin pie (containing nutmeg) there is less reason to be concerned than if your Chihuahua eats half the pie but individual dogs can have different reactions so watch for any symptoms that your dog might be experiencing problems. In general, if your dog hasn’t shown any symptoms in 48 hours, he should be fine. If you do observe any symptoms, contact your veterinarian. (A Chihuahua that eats half a pie could have an upset stomach and diarrhea but those are not typically symptoms associated with nutmeg toxicity.)

More concerning than a dog that steals some pie (since most recipes only call for small amounts of nutmeg) is the dog that steals an entire container of ground nutmeg, whether it’s in a can or bottle. It would be very concerning if your dog stole whole nutmeg. In these cases your dog could easily ingest large amounts of the spice. If this occurs, contact your veterinarian or a poison control center immediately.

What If Your Dog Has Eggnog or Pumpkin Pie?

If your dog helps himself to some eggnog, pumpkin pie, or another food item that contains nutmeg, he’s a naughty dog. We all have naughty dogs at times. In most cases the amount of nutmeg in these foods isn’t enough to be toxic to a dog unless your dog really makes a pig of himself.

Your dog is much more likely to experience a stomach ache, diarrhea, or vomiting from eating these foods than to be effected by the small amount of nutmeg that is normally called for in the recipes. For example, the most popular pumpkin pie recipe on Google right now calls for just 1/4 teaspoon ground or freshly grated nutmeg. That’s probably not enough nutmeg to effect even a small dog. Plus, it’s spread throughout an entire pie with other ingredients.

That doesn’t mean you should give your dog eggnog or pumpkin pie. It just means that, depending on your dog’s size, nutmeg toxicity is usually unlikely unless your dog gets into a container of nutmeg.

You do need to beware of other ingredients when it comes to beverages and baked goods that contain nutmeg. For example, some of the foods that contain nutmeg may also contain raisins, chocolate, macadamia nuts, or xylitol – all of which can make your dog ill. Most baked goods contain lots of sugar which is bad for your dog. Even when nutmeg itself isn’t toxic to your dog, some of the other ingredients in foods and beverages can be harmful to your dog.

Foods and beverages containing nutmeg, such as pumpkin pie, eggnog, custards, sweet potatoes, and others, are often very tempting to dogs. Nutmeg can be toxic to dogs. Fortunately, your dog probably won’t be harmed if he should steal a bite of these foods. However, you do need to be careful and make sure that your dog doesn’t have access to larger amounts of nutmeg. As little as two teaspoons can be toxic to your dog. If you believe your dog has consumed a dangerous amount of nutmeg, contact your veterinarian and/or a pet poison control center immediately. 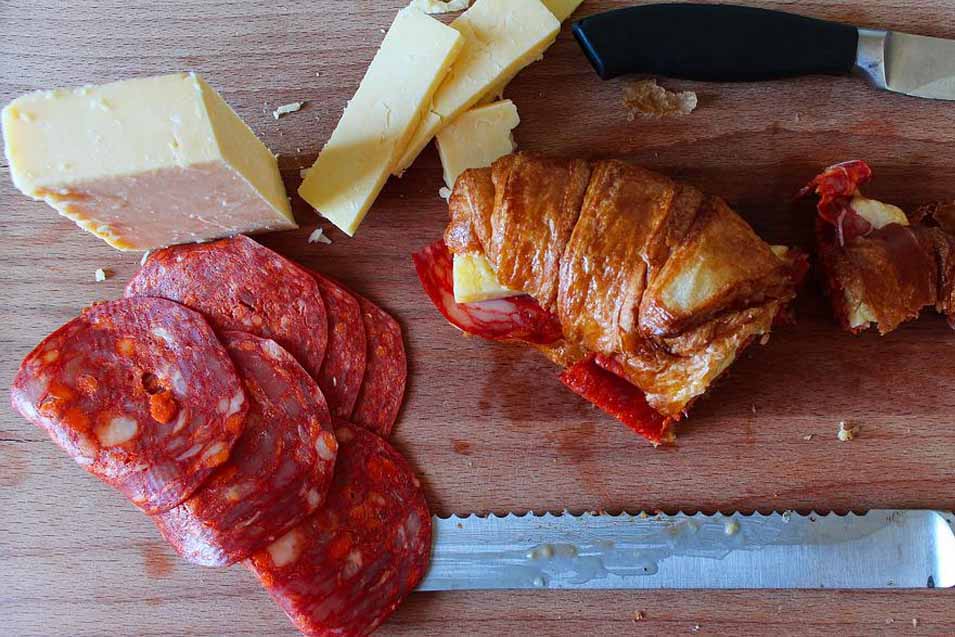 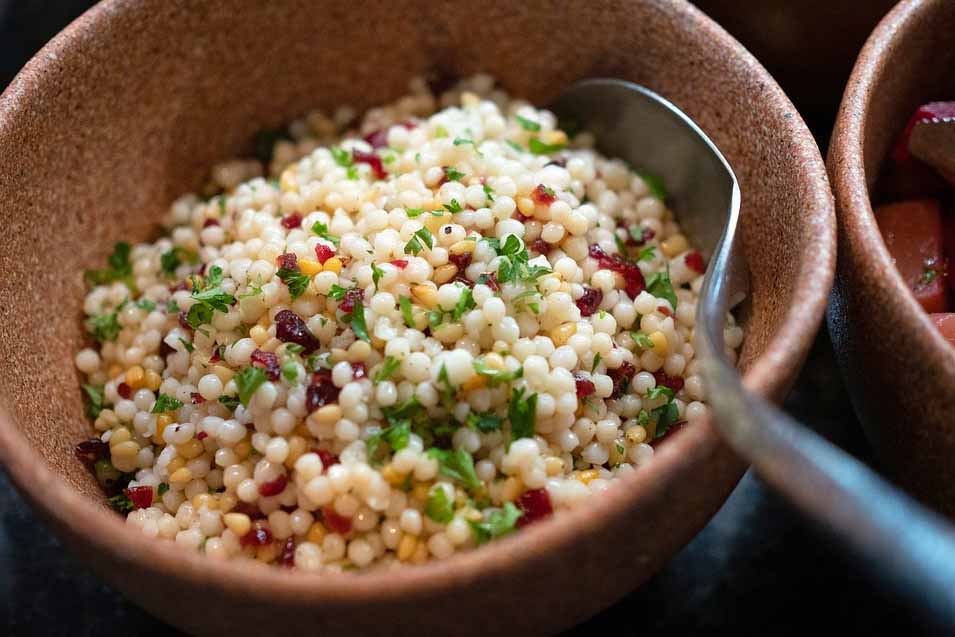